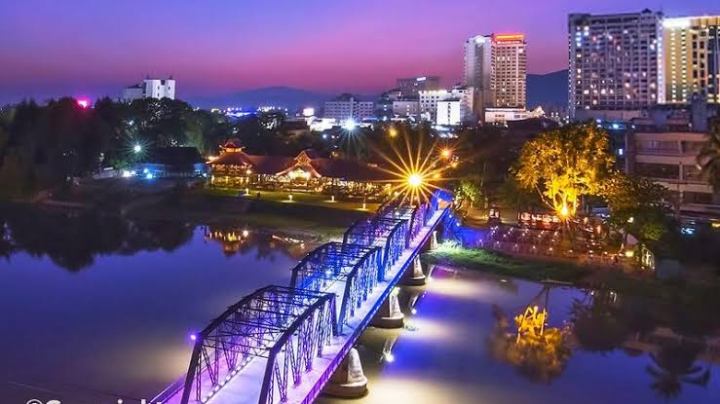 It is the largest city in Northern Thailand. It was once the capital of the Lanna Kingdom and is considered one of the most culturally significant cities in the region. At its historical center is the Old City, a roughly 1.6 km walled and moated square that’s home to over 30 Buddhist temples, some of which are as old as the city itself.
As well-preserved as it is, don’t let the city’s historical and cultural appeal fool you. Chiang Mai has modernized in many ways and expanded far beyond the walls of the Old City.

Weather-wise, November to February is the ideal time to visit Northern Thailand. It’s the coolest and driest time of the year. From February to March onwards the city can become smoggy with the burning of the rice fields in surrounding areas and beyond.

Want to see a little bit of Chiang Mai and its culture?

Explore the city by tuk-tuk

YES you know us too well, we love jumping on a Tuk Tuk because it means no walking… There is no better way to see the city than on one of Thailand’s iconic tuk-tuks. During this time, you can visit the markets, alleyways, temples, and the old city. Tuk tuk drivers are friendly and happy to show you around. Look for one which speaks good English and negotiate your rates BEFORE you depart.

Not just a waterfall to look at but an adventurous one you can climb up YES you read it right. Thanks to the limestone in the water, the rocks are not slippery which allows you to climb them easily without any equipment. You don’t even need shoes! you could say the rocks share the same texture as pumice stones. The middle level of the waterfall seems to be a little more dangerous and slippery, you can tell these areas because of the colour changes on the stone to a green or brown colour, not the normal white colour, in the harder to climb areas there are ropes to help you.
The kids had a great time splashing in the water and looking for small fish hiding, then we would put them on our backs and climb up or down. We didn’t spend too long here, about an hour no longer than 2.  It takes about an hour and a half to get here from Chiang Mai City, and don’t worry there are plenty of places to stop to eat or use the bathrooms including at the waterfall.

One final thing to note, there are a few signing warning you of snakes !

Discover the hundreds of temples 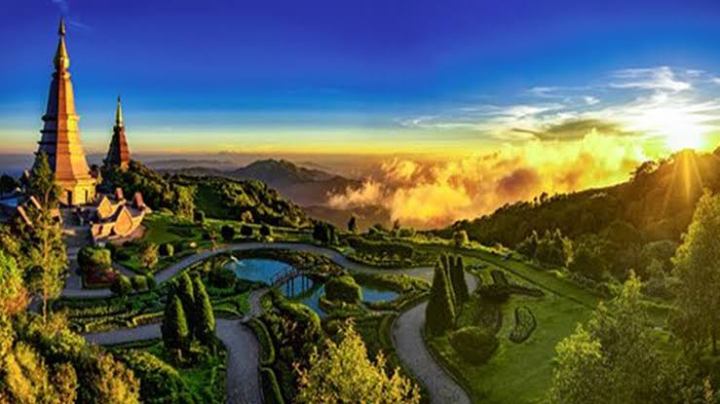 Chiang Mai is blessed with over 200 temples, many of which date back hundreds of years. There are simply too many to list here, but highlights include the beautifully decorated Wat Chiang Man, the 14th century Wat Suan Dok, Wat Phra Sinh famous for its lion image, Wat Umong which is nestled outside the city surrounded by mountains, and Wat Sri Suphan which is made entirely from silver and alloy metals. Another popular temple is Wat Lok Molee which sits next to the city moat and is one of the most impressive. You can visit the temples by yourself, or book a tour with a local who will explain the architecture and history. Just remember, whenever you are visiting a temple, you need to dress modestly, take off your shoes, and be respectful. 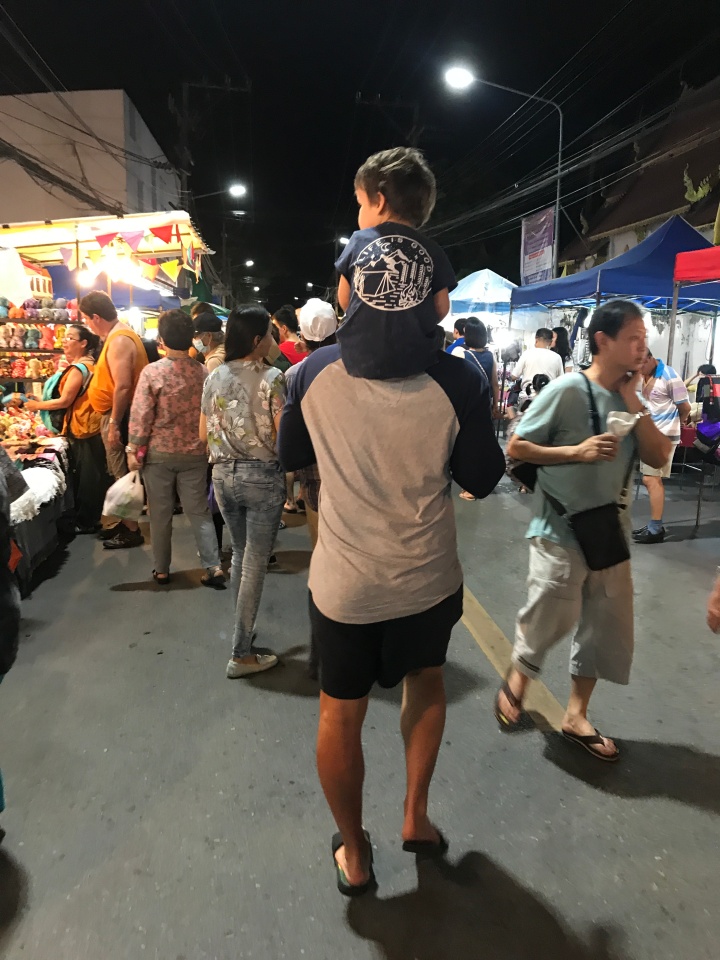 Every Sunday night the centre of the Old City is closed to traffic, and food vendors, craftspeople and artists take over with their unique and bargain-priced street markets.
If you’re looking to buy any souvenirs this is the place to do it.
Or if you would rather spend your money on something different, you can get a foot massage for only a few dollars, and literally stuff yourself silly with all the delicious local food that is scattered all over the markets.

If you make it to Chiang Mai in November then you’re lucky to witness loy krathong festival, Have a read of my blog to find out more. Loy Krathong and Yee Peng Lantern Festival.

For the kids and family. 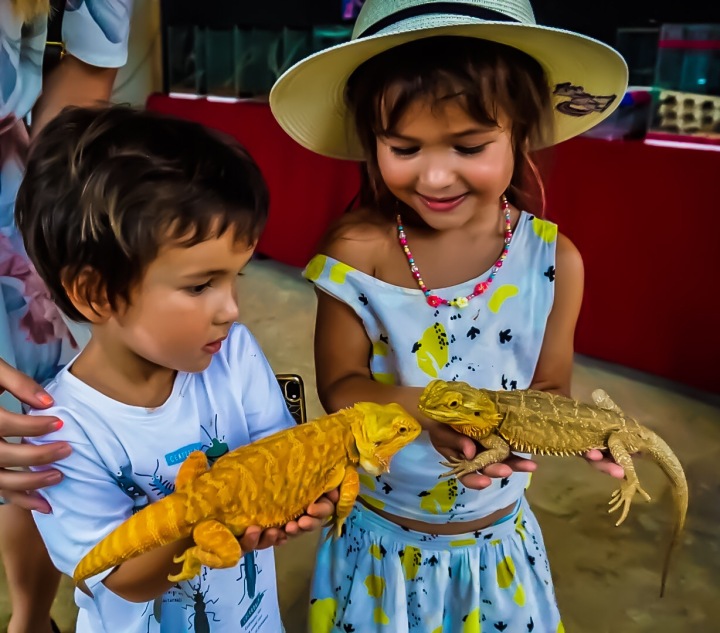 What an incredible Zoo to take your children for a hands-on experience, I highly recommend coming here.
You start off looking at preserved Insects then make your way on to the more exciting hands-on areas.  All the staff are really friendly and spend time with you showing you the insects. We got to hold Stick insects, left insects, lizards, beetle larvae or for the more adventures Spiders and scorpions. This is not a big Zoo, you would comfortably spend 1 to 2 hours here. Our children were 3 and 4 but any age would be great, There’s also a small cafe on site for a drink or ice cream at the end of your experience.  We loved our short visit here and give it a 9/10 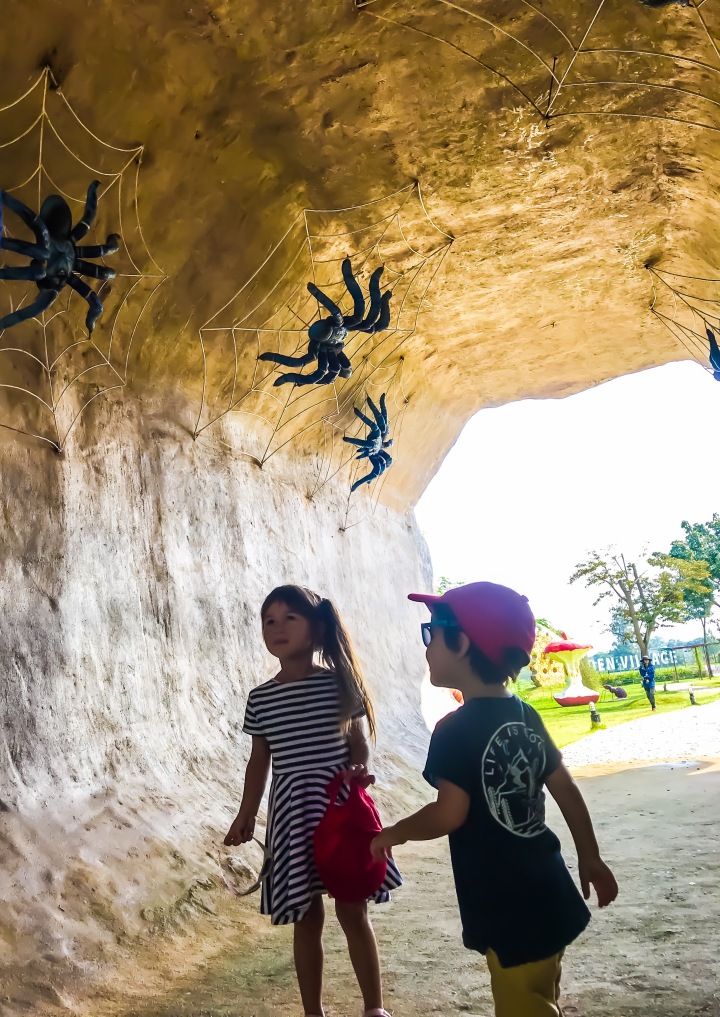 This park has huge colourful sculptures of reptiles and bugs from past and present, an adventurous wooden playground, and a small petting zoo with Horses, pigs, sheep, and donkeys. But the star of Hidden Village is the dinosaur exhibit. Enormous, possibly life-size models of the beasts, which move and roar. The kids can also ride dinosaurs bounce on a bouncy castle or play in a playground in the shade. 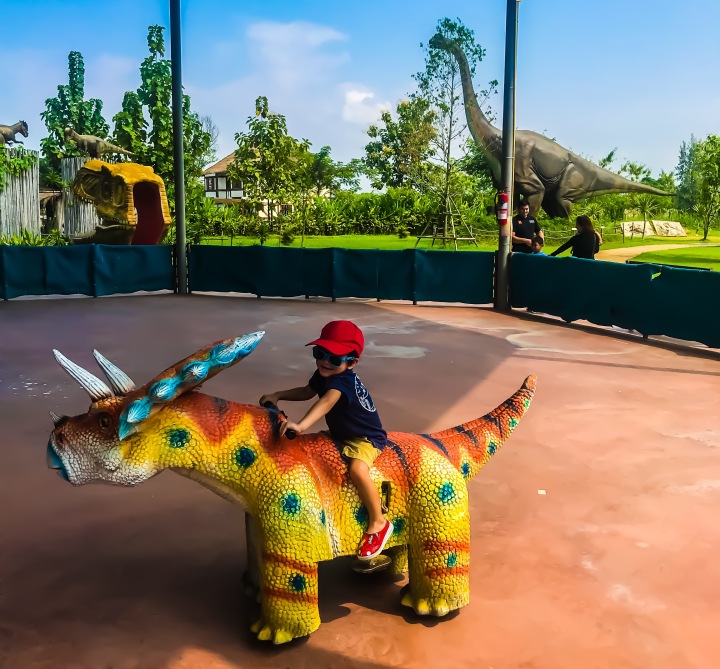 There is a steakhouse which serves a mix of Thai and western food which also does a cheap buffet where our children dined for free.
We spent about 4 hours here, getting here early before the heat was too intense.   The Kids enjoyed the day, we give it a 6/10

This animal park is open day and night, but the real action happens after dark when you can view all sorts of wildlife from the back of an open-sided tram, hence why I loved this.
There are two different areas which are open only during the evening. The Savanna Safari Zone is also home to hundreds of species of wildlife including kangaroos, water buffalos, white rhinos, lions, hyenas, ostriches, zebra, giraffes, wildebeests and dingos among others. You will also pass the aptly named Predator Prowl Zone where lions, tigers, wolves, black bears, vultures, crocodiles, and African hunting dogs can be spotted.

To view the animals, you are taken around the zoo on a 5-kilometer tram ride which departs every hour. The journey takes around 30 minutes each tram ride and there’s 2 tram ride, this gives you the opportunity to learn and get up close to these majestic creatures (though many are fenced away for safety). The trams have open sides giving you maximum view of the wildlife. 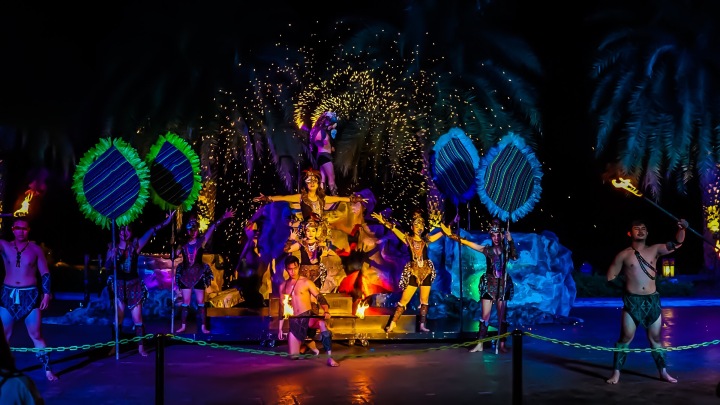 Completely unrelated, but spectacular nonetheless, is the parks spectacular Musical Fountain and Water Screen show. The two nighty performances, starting at 8.00 p.m. and 9.10 p.m., sees an impressive show of 12-meter high water fountains which ‘dance’ to music and lighting spread over a huge area of the park. It may not be wildlife related, but it’s well worth watching.

As a family we enjoyed our time here and should have got here sooner, we give it a 6/10.

The Chiang Mai Zoo is located about 20 minutes from the Old City on a hill not far from Doi Suthep
It is situated on the side of a hill it’s BIG and divided into many zones so be prepared for lot’s of walking, so much so I wouldn’t recommend it, you know us, we don’t like walking so here’s some other options:

Taking the open-air buses – which look more like supersized golf buggies – as you can easily hop on and off at every station (20 THB per person). Just note that these drivers won’t drive at a slow ‘’sightseeing-speed’’ but will rather hurtle up and down the steep roads. Alternatively, you can opt for a golf buggy which sets you back at 300 THB per hour, This is what we did It was so much fun zooming around with kids taking turns to help drive. To keep the cost down we hired the Buggy and went to the very end of the Zoo to explore then made our way back, once we dropped it back off we when explored around the beginning of the Zoo.
Unlike most Zoos everywhere else in the world, you can get up really close to the animals and even feed a few like the giraffe, elephant, and hippos.
Mila even took a ride on a pony.

Like I said at the beginning, this Zoo is massive and we can easily spend all day here,
It also has a Snow Dome, 3D cinema, Panda viewing and Aquarium that all require an extra fee if you want to visit.

As a family that had come from a New Zealand Winter we didn’t spend much time in outside parks, it was just too hot for us. However on cloudy days ( few and far between ), we did get outside, a couple of nice places to explore were:
Long Buak Hard Park

This had a small kids playground, pond with large fish you could feed, walking track with exercise area, and a few places to eat.

We only spent about an hour here, however, the kids had a great time, it’s a beautiful park to walk around and the kids loved playing in the park and feeding the fish.
This is located in the old town square. 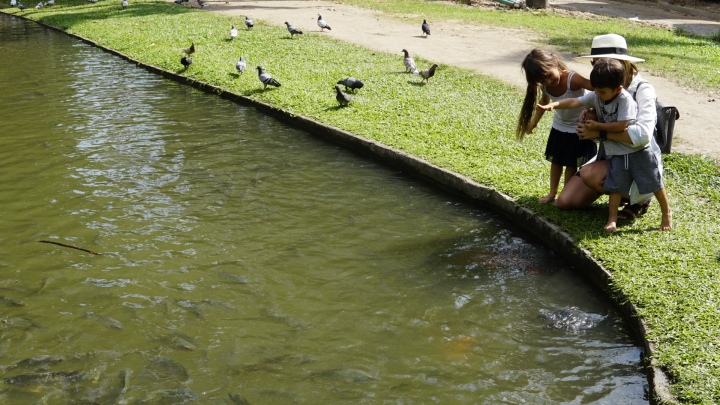 At this park, you can walk, hire a bike or golf cart. We have both walked and biked, however, there are no kids bikes or kids seats. There are a few cafes and an amazing restaurant called Royal Project kitchen in this park. There are different areas within the park like a Japanese garden, greek garden, insect area, temple, large ponds.
You need to pay to get into this park, roughly 100 bart per person.
This is located near the night safari.

This site uses Akismet to reduce spam. Learn how your comment data is processed.