What’s in this blog?

The entire festival of Loy Krathong and Yi Peng take place over three days after dark from 7pm to 1am on the 12th lunar month of every year.

This is arguably the most picturesque charming festival celebrated in the Kingdom of Thailand.

You will see twinkling lights floating downriver, hanging from trees, buildings, and temples, and soaring high in the night sky. 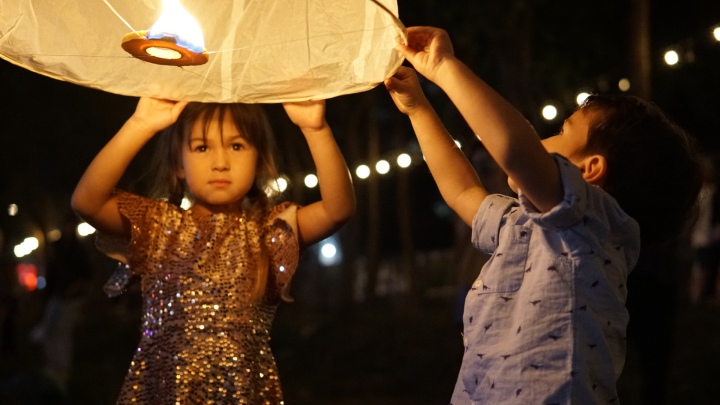 We had a blast walking around watching the excitement unfold, all the lanterns drifting up into the sky and the ones which didn’t quite make it, the river being lite up with beautiful floating flowers “Krathongs”, the many street parades, dancing and fireworks, It really is something not to be missed and should be on your bucket list (If you keep one!)

At the time we had our children in school and were told to pick them up by midday because the roads will become busy with traffic, we were very surprised at how easy it was for us to get in and out of town and walking around the festival on the Thursday evening, YES it was busy but not gridlock or chaos that we were told to expect.

The most happening places are around the banks of the Ping river.

The area of Nawarat Bridge and the Iron Bridge,  these are also the best spots to watch the celebrations. This is where we spent a lot of time, the two bridges are busy with people however once off the bridges walking along the river bank you will find a free spot to light your lanterns. 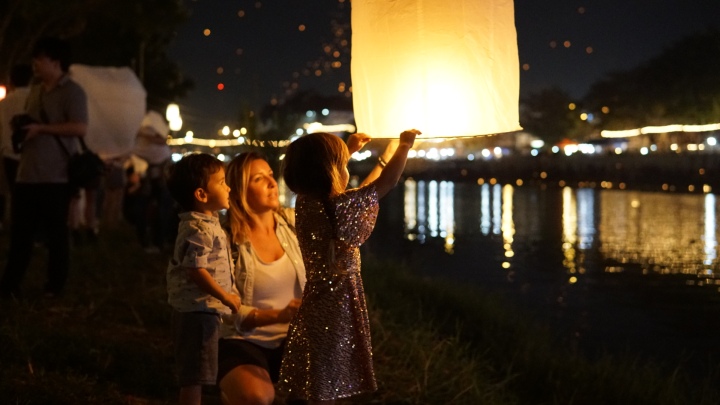 You can purchase Krathong and lanterns everywhere around these areas, each cost between 30 to 100 Bahts depending on their sizes and designs. Make sure you get there somewhat early as they do run out. We went to buy some more lanterns at 10pm and they had run out. 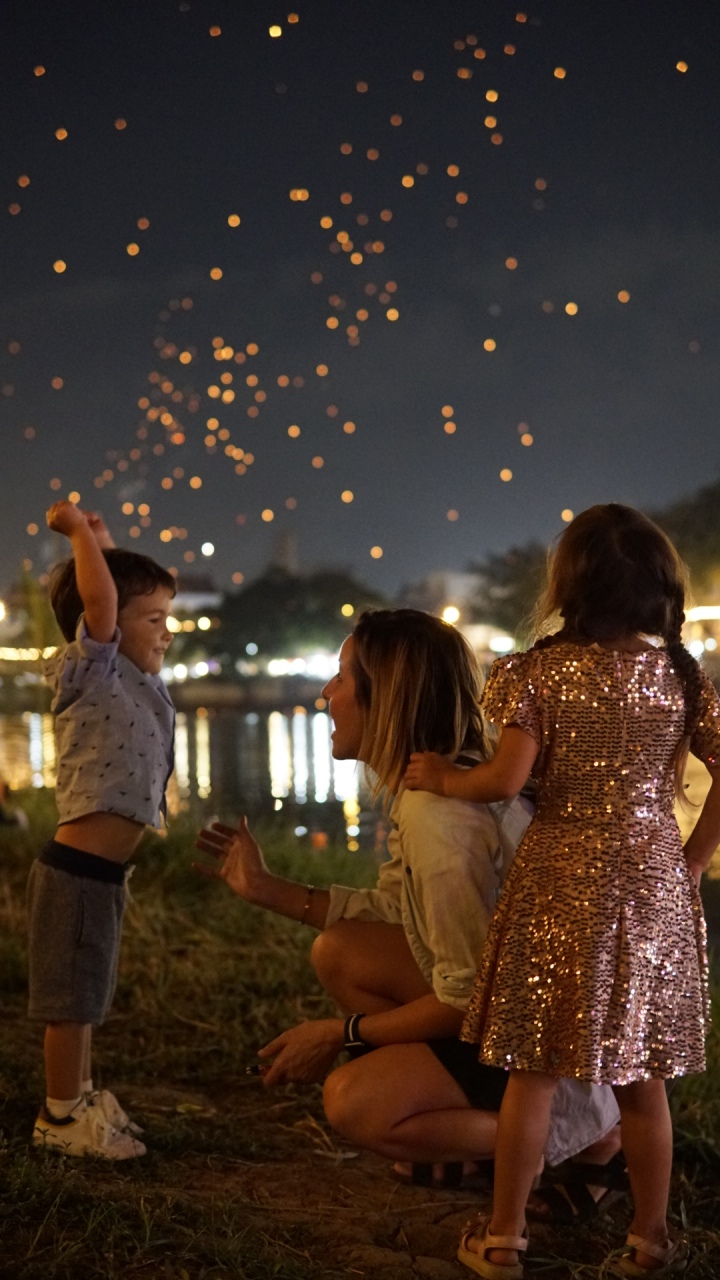 As part of the festivals, there are plenty of other activities happening all over, In the heart of the old city is where most of the activities take place.

At Three Kings Monument, hundreds of dancers of all ages will be performing Lanna Traditional Dance at the opening ceremony.

Another popular place to release lantern is Tha Phae Gate, which is at the eastern side of the old city.  Tha Phae Gate is one of the most famous landmarks in Chiang Mai and the spacious public square is the site of many cultural activities and festivals celebration. 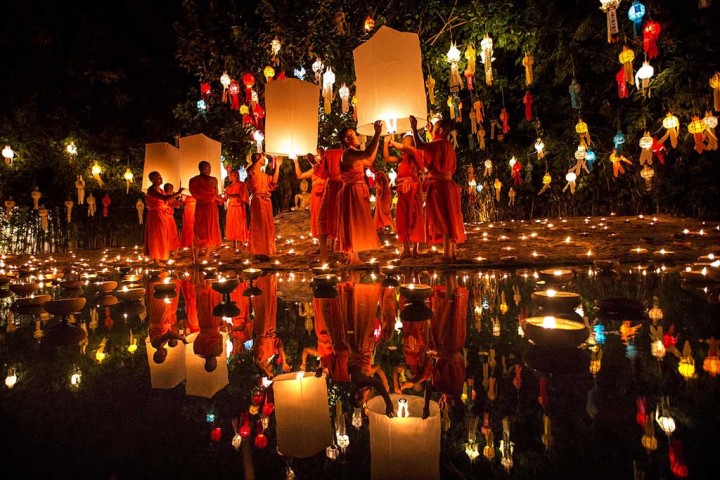 Monks release lanterns and Krathong’s in front of a Buddha statue at Wat Pan Tao, If you want to get a good photo you need to get here early.

Lighting and releasing the lanterns and Loy Krathong’s was a fantastic family experience, I would highly recommend being anywhere in Thailand to experience this festival.

I hope this inspires you to travel to Thailand around this time, a big plus is this is the cool season in Thailand, daytime temperatures are still hot but the evening is more bearable.

Please note, I have told you the free areas to go. If you want an amazing photo shoot like the one below, you need to pay anything from 3000B upwards for this. 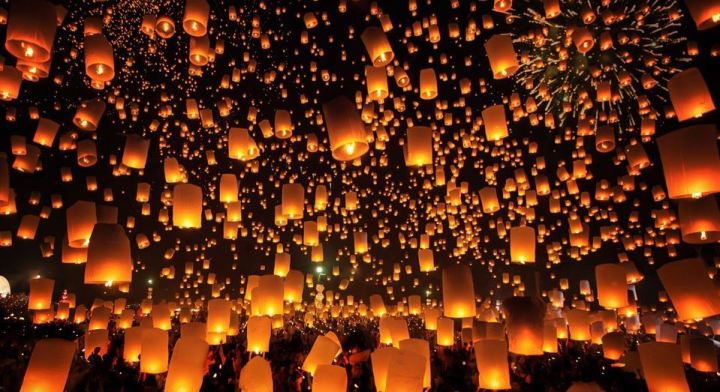 The highlight of Yee Peng Lantern Festival in Chiang Mai is, of course, the event of Mass Sky Lantern Release where thousands of lanterns are released simultaneously into the night sky.

Yes, that’s the moment captured in the emotional videos and Instagram photos that makes people all around the world put Chiang Mai in their bucket list for a once in a lifetime travel experience.

There are several different Mass Sky Lantern Release events of different sizes happening around the area of Chiang Mai,

A little background on this festival:

This festival name has a few different spellings: Loy Krathong, Loi Krathong and Loi Kratong are all correct.

Historically these two festivals were set during different times of the year, but today they are typically celebrated at the same time. It is near the end of rainy season (usually late October – late November).

The historical origins of Loy Krathong are not entirely clear, but this is one of the most important holidays in Thailand. Loy Krathong is the opportunity to atone for one’s sins during the previous year and make a wish for success in the year to come. People will symbolically place a floating krathong* onto the river as they repent and make a wish. If the krathong stays lit until they can no longer see the floating vessel, their wish will come true.

“Loy” means float and “krathong” is the actual floating vessel is placed on the water. It is usually made out of a slice of a banana tree trunk and is decorated with intricately folded banana leaves and flowers. Incense and candles are then placed on top.

Yi Peng is the festival of lanterns you are most likely familiar with. In preparation for this festival, people create lanterns and hang them outside of their homes and donate them to temples, which represents resisting the darkness and welcoming a brighter future.

On the night of the Yi Peng festival, people make a wish and release their own lanterns, khom loy, into the sky. It is said if your lantern stays lit until you can no longer see it, your wish will come true.

This site uses Akismet to reduce spam. Learn how your comment data is processed.